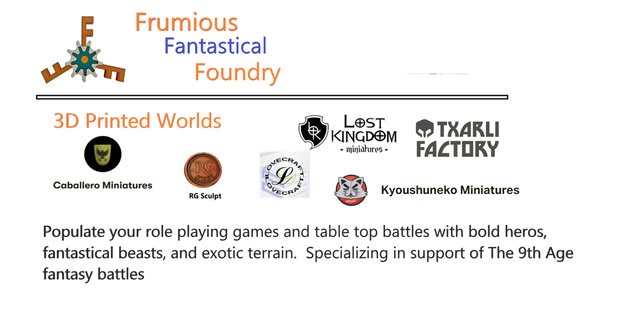 ARMY CONSLUTING
One of my favorite things to do is work with someone toon an entire army project. I have chosen various license to be able to create many common army types.   Building a unique army around a theme has always been one of my favorite hobby projects, and with 3D printing there are so many possibilities to build an army and even create terrain pieces to go along.   Drop me a line to discuss and get a quote.

Scale
Many artists release their sculpts in 32mm heroic scale, so its important to scale test models when blending with existing models or other ranges.  It can also be a challenge to get some models to fit on the right bases size.  While I can not digitally alter anyone else files, I can cut them when the resin is soft  and digitally scale them to represent all kinds of unit types form swarms to giants.

Mirroring
Need a few more poses?  I can print files mirrored to give variety to a unit.

Unit Fillers
Unit fillers are great weapon to add some centerpieces to  unit as well as the utility of representing various models.  Picking the right piece and base size will give you a lot of flexibility in list building and convenience in playing.

Movement trays and bases
I can print snap on bases or slotted movement trays to allow your army to shift between game systems or even upgrade from one unit type to the next and back.  I can also print custom movement trays with minimized features and textures tying them to your army.

Custom Models
I have good working arrangements with several 3D artists, and can hack my own way through simple things. If you want something sculpted I can try and get you a quote.

Here are of the projects I have helped bring to the table (PICTURES COMING SOON):
Henry's Fighting Cocks
Heny has amanost a rooster heavy halfling army to proxy as varios other arimies

Henry's 9th Sons of the Titans
Provided RG Sculpt Giants and Asgard Rising Trolls as his Grendilkin for his Supplemental Army list focus around giants.